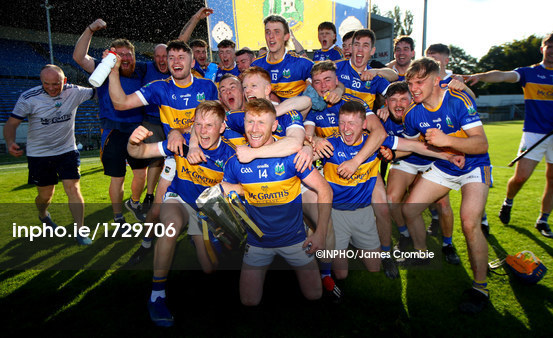 Come one, come all, I’ve a tale to tell, how the best horse won … but damn near fell,

The Dan Breen Cup, Tipperary’s crown, due to be settled in old Thurles town,

A novel pairing, both packed with stars, supporters thirsty … will ye not open the bars?

TG ceathar on duty, supporters at home, Corona has stopped us, but at least t’will be shown.

Kiladangan are back after heartbreak before, ready again for the coming war,

Hogan, Quigley, Flannery and Hayes, forewarning they have of the Loughmore plays,

Their forwards’ scoring won fame and renown, will this firepower seal their maiden crown?

With John and Aidan, Ciaran and Co., a McGrath army, this green and red foe,

Beating Clonoulty, Nenagh and Kilruane, they continue their march onwards and on,

One last test they still have to face, the blue and gold warriors they now have to chase.

The sun it shone, the whistle blew, away we go and the sparks then flew,

Kiladangan take blows, but never panic, stick to their task, the struggle titanic,

We watch on in awe, our gaze transfixed, half-time arrives with just two points betwixt.

Scores ebb and flow, the 2nd half progressed, how will this settle? who will be best?

Paul Flynn grabs a point to give us the lead, ‘Ref, blow it up, check your watch, pay heed’!

The angle is tight, the distance is far, a point from halfway, Noel McGrath, sinn thar barr!

Changes are made, Willie makes way, McLoughney once more enters the fray,

With am breise near up, a slip of the hand, a 65 to Loughmore, John McGrath manned,

With ice in his veins, he strikes it true, clenches his fist, the posts split in two.

McLoughney’s fed, his eyes are ablaze, smashes to net and dances in a craze.

The whistle it blows and history is sealed, the roof it near lifts from Tom Semple’s field,

Paul Flynn raises Dan Breen, all played their part, such a proud day from Monsea up to Scart,

When days grow short and nights they grow long, tales will grow taller and be turned into song,

When history was made by Lawlor and crew, t’was September 2020, Cill an Daingan abú!

Kiladangan are running a Super Bowl square to kick start ...

Next up in the Kiladangan YouTube series is the 2004 Muns...