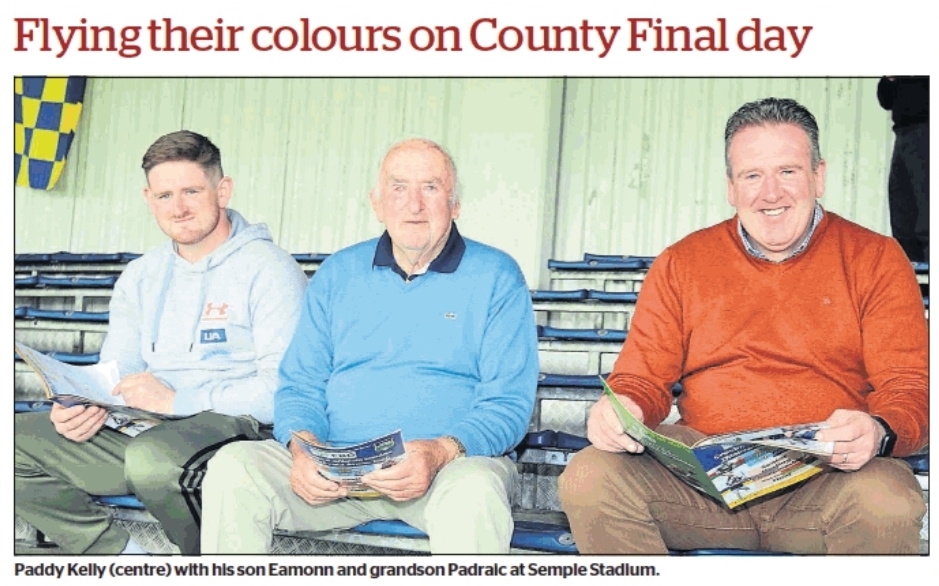 Kiladangan GAA Club were deeply saddened to hear of the passing of our life president – Paddy Kelly.

Paddy first played adult hurling for Kiladangan in 1956. In 1966 he won the first of two North Intermediate Hurling medals, the second coming 5 years later when he captained the team and followed this up with a county medal. Paddy was captain of the Tipperary side in 1972 that won the Munster & All Ireland Intermediate Hurling Titles.

Off the field, Paddy represented Kiladangan on the North Board and was chairman of the club from 1989 to 1996. During his tenure, the club grounds in Puckane were revamped with the field developed and new dressing rooms erected. Paddy was extremely proud of the club and all the subsequent developments and successes both on and off the field in recent times.

Paddy was a familiar face to anyone that attended games in the GAA grounds in Puckane – where he carried out many roles with meticulous detail. He was always on site looking after the GAA grounds and pitches where he opened and closed the dressing rooms, oversaw maintenance works and parking cars at matches. He also spent many a night selling tickets for the club lotto. Just some of the many roles that Paddy did for the club over the years.

Later in life, Paddy was named as a life president of the club. In 2017, the club honoured him for the lifetime service that he had provided to the club as both a player and officer whilst he was also honoured by the Nenagh Guardian in 2018 after being selected for the Hero of the Community award.

Paddy truly was the face of Kiladangan GAA over the last number of decades and he will be a huge loss to the GAA club and to the parish.

We express sympathy to his wife Alice, son Eamonn, daughters Noreen, Brid and Ailish, brothers Neddy, Jimmy, William and sister Winnie (Paddy was predeceased by his brother John) and to his beloved grandchildren and to his wider family and large circle of friends.

Paddy - Our club man, always there to keep an eye on us, we will miss him dearly.

We are delighted to announce that a Kiladangan GAA online store is now set up on the O'Neills website on the following link: www.oneills.com/shop-by-team/gaa/ireland/kiladangan-gaa.html

Many thanks to Liam Hayes for his work on putting this together.

If anyone in the local area is in need of getting access to stores, getting groceries, prescriptions or any other necessities then please do not hesitate to get in contact. We have a large number of willing members who have volunteered their services.

If anyone is interested on getting their hands on the Dan Breen Cup for photo’s etc then please contact Art Flannery on 086 357 7571.

Registration for adult club membership is now live on the club website with the rates as follows:

You can purchase online at kiladangangaa.com/membership_products or contact club registrar Fergal Hayes on 086 150 6266.

There are a number of framed team photo’s available to purchase of the Kiladangan County Senior title winning panel. More details available on the Kiladangan Social Media pages. For further details and to order, please contact on Eoin Kelly on 087 920 1249.

Tipperary Supporter's club membership is available from Catherine Gleeson (0879177233) and costs just €40 to join up with all proceeds going to the Tipperary county hurling teams. More details at: http://www.tippsupportersclub.com/. Membership Gift for 2021 is a Reusable Three Fold Double Layer Safety Face Mask.

Ryan’s Fundraiser for the Mater Foundation

A big well done to Kiladangan Under 17 player Ryan Gillick who raised €533 for the Mater Foundation after completing the 100 miles in a Month fundraiser. Great stuff Ryan.

The club wish to express sympathy to the McLoughney family and to the Kilruane MacDonagh club on the passing of Kilruane life president Tom McLoughney who passed away recently. May he rest in peace.

The club wish to express sympathy to Rita and Joe Ryan (The Whiskey Still, Dromineer) on the passing of Rita’s mother, Maura Gleeson. May she rest in peace.