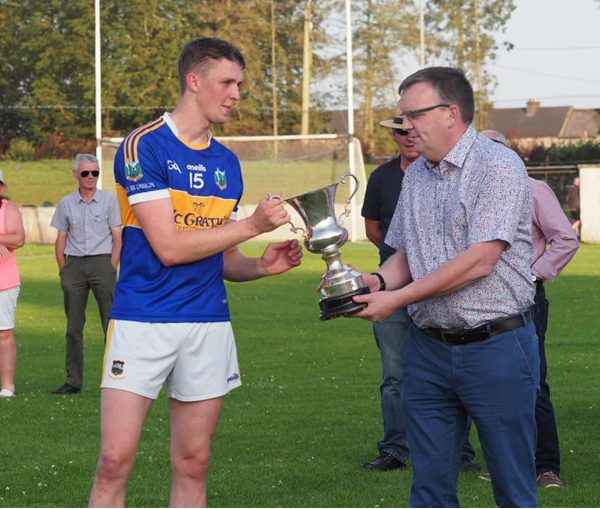 Well done to the Senior Hurlers who claimed the Jim Devitt Cup after they Moycarkey Borris last Saturday evening on a 2-23 to 0-21 scoreline the Group 2 County League Final. Dan O’Meara and Bryan McLoughney were the Kiladangan goal scorers. Full team, scorers and score tracker are available on the club website.

The North Senior Championship draw took place last week. Our Senior ‘A’ side will face Burgess in the first round whilst the Senior ‘B’s have received a bye. This will only take place in the event of the Tipperary Senior hurlers failing to make the All Ireland Hurling Final.

Kiladangan will take on Silvermines in the North Junior ‘B’ Hurling League final this coming Sunday 1st August at 12 noon in Portroe. Best of luck to the players and management.

The North Junior ‘B’ championship draw was carried out last Thursday. Kiladangan have been drawn in a group of 4 with Templederry Kenyons, Ballina and Nenagh Eire Og. The championship is scheduled to start on the weekend of 6th/7th August.

The Under 19 hurlers will take on the winners of Silvermines and Toomevara in the North ‘A’ Hurling Semi Final. This game is provisionally fixed for Wednesday 4th August.

The Under 15’s lost out to Newport last Thursday evening. They are at away to Burgess this Thursday 29th at 7pm.

Well done to the Under 13 ‘B’ footballers who defeated Burgess last week by 1-7 to 0-8 to claim the North Shield with team captain Willie Slattery was presented the shield after the game. Both Under 13 sides were in hurling action last Tuesday 20th with the ‘B’s defeating Burgess whilst the ‘D’s lost out to Newport. On Tuesday 27th, the ‘B’ side hosted Borrisokane with no result at time of going to print.

Both Under 11 sides were due to be in action this coming Saturday but these came will not be going ahead and will be played at a later date.

The Kiladangan GAA Golf classic will take place this coming Friday 30th July in Nenagh Golf Club. It is a 3 ball champagne scramble event and we have some fantastic prizes on offer such as 3 balls for Lahinch, Trump Doonbeg and Carton House. Entry is €180 which includes a meal in the club house after (or €150 per team for golf only).

Best of luck to the Tipperary senior hurlers as they take on Waterford in the All Ireland Quarter Final this coming Saturday.

Kiladangan Juvenile Camp will take place on Tuesday, Wednesday and Thursday 3rd-5th of August from 10am-2p for boys and girls aged 5-14 for a cost of €5 per day.

SeniorBoth Senior sides are out in action this coming wee...