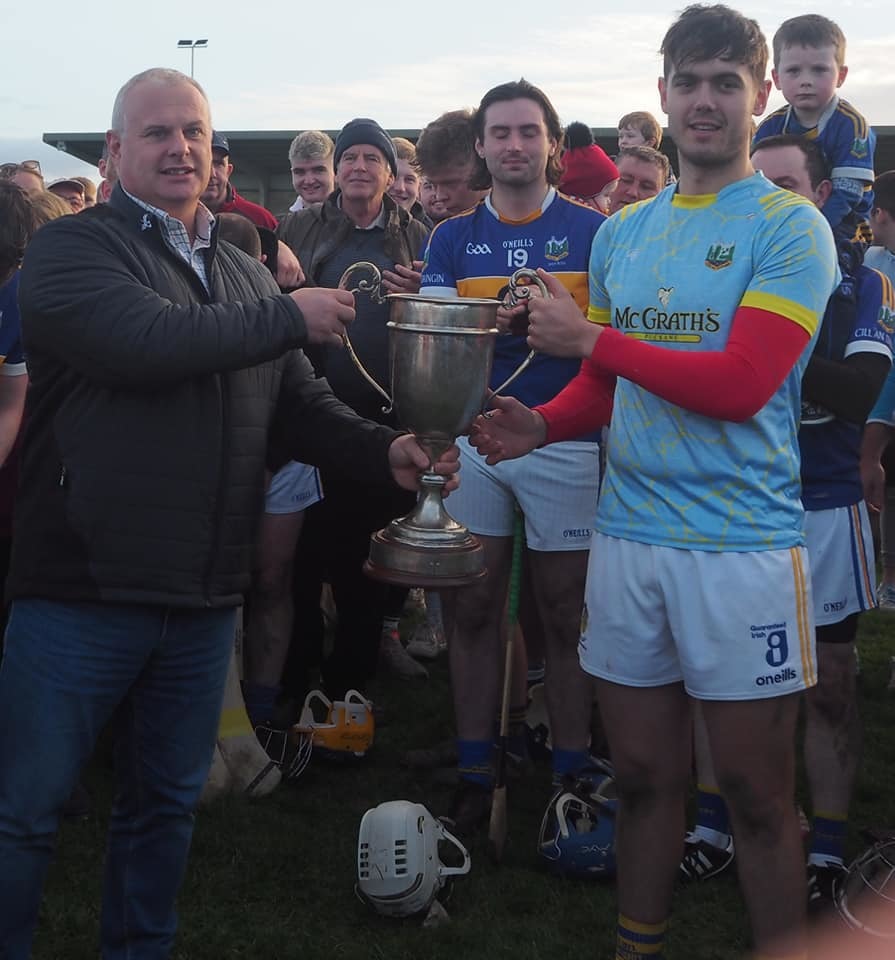 Pride of place goes to the Junior ‘C’ hurlers who claimed the North title last Sunday afternoon in Borrisokane after an exciting 2-19 to 1-19 win over Ballina. Mark Gleeson and Frank Flannery were the scorers of two excellent goals for Kiladangan. Full list of scorers, team line up and score tracker is available at KiladanganGAA.com.

Kiladangan captain Liam Hayes accepted the O’Keeffe cup after the game from North Board secretary Philip Delaney. Well done to the lads on a fantastic achievement. Its great to see the clubs fourth team winning silverware. Well done to the management team of Eoin Butler, Seanie Hackett and Paraic Kelly.

Best of luck to the Junior ‘B’ hurlers as they take on Mid champions JK Brackens in the County Semi Final this coming Saturday 13th October at 2pm in Moneygall. It would be great to see a big Kiladangan support there to cheer the lads on.

The North Under 21 Hurling Championship is due to start on the weekend of 20th/21st November. Kiladangan are competing in the ‘A’ grade with the draw taking place this coming Friday 12th November and will be streamed live on the North Tipperary GAA Twitter page.

The Under 17 footballers took on Moneygall Clonakenny on Tuesday 9th November at 7.00 pm in Puckane in the North Semi Final with no result at time of going to print.

The Under 14 hurlers had a great win over Borrisokane in Puckane last Thursday evening.

The Under 12 hurlers lost out to a strong Kilruane MacDonaghs side last Saturday afternoon in Puckane.

Join the Kiladangan Euro Millions draw for the year for just €20. All entrants will also be entered into a draw to win a trip for two people to New York. 12 month entry to the Euro Millions draw and Euro Millions plus draw- Starting in November 2021 with 1,600 chances of winning. A donation from the fundraiser will be made to both the North Tipperary Hospice and Friends of Nenagh Hospital. Join online at kiladangangaa.com/products

To former Kiladangan player Eric Kirwan who was in goals for Naomh Colum Cille as they won the Tyrone County Junior Hurling title last Saturday.

Under 21The Under 21 hurlers were extremely unlucky to lo...

Under 21Best of luck to the Under 21 hurlers as they take...

Under 21Well done to the Under 21 hurlers who had an impr...