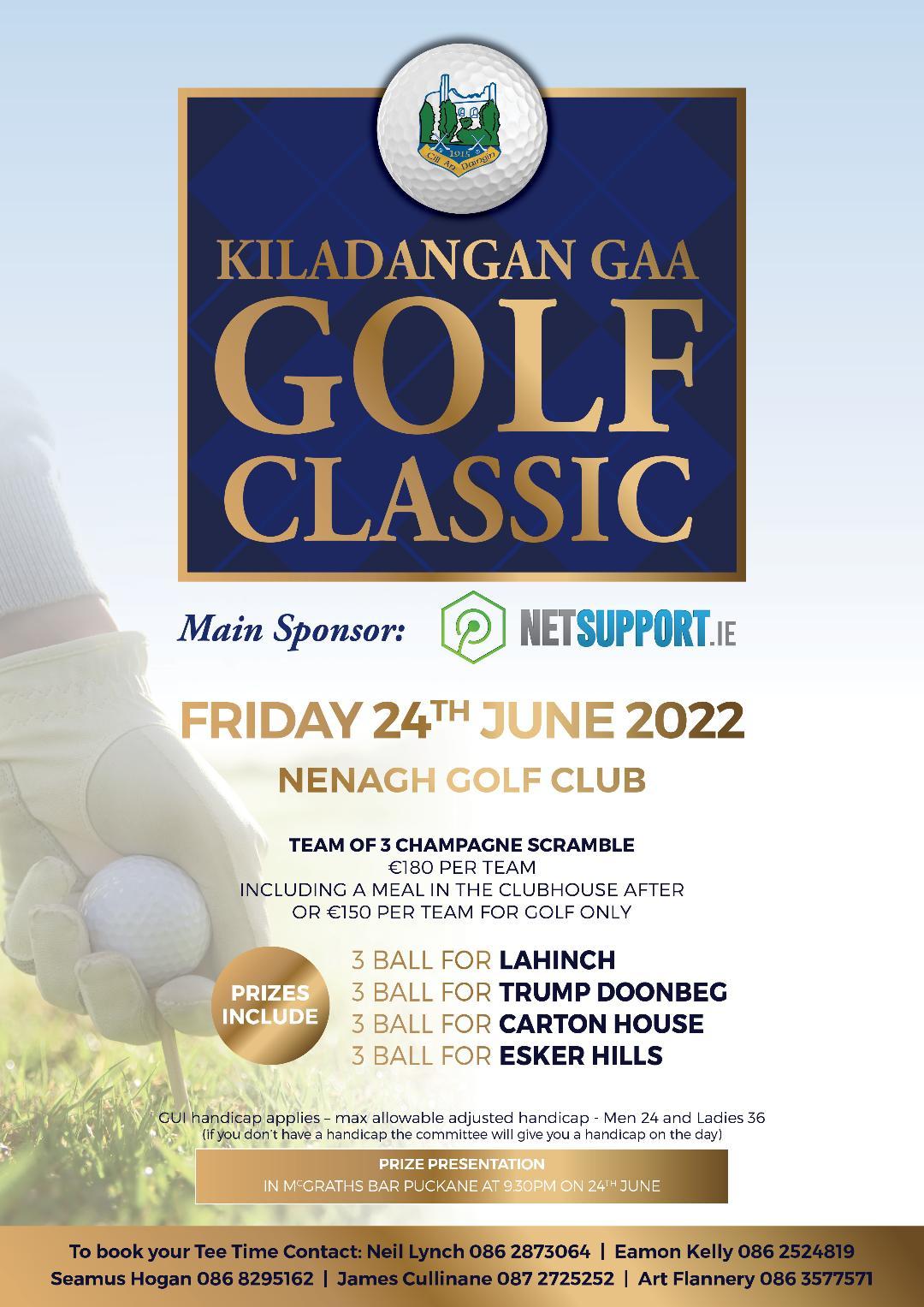 The fifth and final round of the group stages of the County Hurling League took place last Sunday in Puckane where the lads lost out by 3-12 to 2-27 to Upperchurch Drombane. Joe Gallagher, Sean Hayes and Bryan McLoughney were the Kiladangan goal scorers with Full team, scorers and score tracker available at KiladanganGAA.com. This now ends the lads league campaign after finishing fourth in the group. They will be next out in action in mid June in the North Championship against Kilruane MacDonaghs.

Hard luck to the Junior ‘A’ hurlers who lost out to Toomevara last Friday evening on a 1-11 to 0-18 scoreline in the Semi Final stage of the North Junior ‘A’ Hurling League. Bill Cleary was the Kiladangan goal scorer with Full team, scorers and score tracker available at KiladanganGAA.com.

Well done to the Junior ‘B’ hurlers who had an impressive 3-17 to 1-15 win over Temeplederry Kenyons last Thursday evening in Templederry in the final group game. Darren Ryan, Stephen Mulvihill and James O’Meara were the Kiladangan goal scorers. Full team, scorers and score tracker available on KiladanganGAA.com. There is still a round of games to take place next weekend with Kiladangan having a bye. Kiladangan have secured a spot in the knockout stages with Silvermines and Templederry Kenyons facing each other to determine who else progresses from the group.

Keep Friday 24th June free in your diary as Nenagh Golf Club will host the annual Kiladangan GAA Golf classic. It is a 3 ball champagne scramble event and we have some fantastic prizes on offer such as 3 balls for Lahinch, Trump Doonbeg, Carton House and Esker Hills.

Tee Sponsorship is available to purchase on the following link: kiladangangaa.com/products

Many thanks to Dave Devery of Net Support (netsupport.ie) who are the main sponsors of the golf classic.

The luck was in for Kiladangan in last Friday nights Tipperary Clubs Draw. Congratulations to James Kelly (Una Powells) who won the top prize of a car or €15,000. Congrats to club treasurer Mary Hogan who won the second prize of €5,000 cash or holiday voucher with her husband Liam (Liam also won €400 as a promoter). Congrats to Alice Kelly who won €500 in the first promoter prize.

The Under 17’s had a 1-10 to 1-10 draw with Upperchurch Drombane in the second round of the County Under 17 ‘B’ Hurling league on Monday 9th May in Drombane. They took on Ballinahinch Templederry on Monday 16th in Puckane and were victorious on a 3-14 to 1-19 scoreline.

The Under 15 footballers game against Lorrha Rovers in the North Quarter Final was originally scheduled to take place last Thursday 12th May was then refixed to take place on Tuesday 17th at 6.45 pm in Lorrha with no result at time of going to print.

Hard luck to our U13 footballers who lost out to a strong Galtee Rovers side last Sunday evening on a 0-5 to 1-10 scoreline in the County Semi Final. Well done to our boys who had a great campaign. Best of luck to Galtee in the final.

Best of luck to Barry Hogan, Paul Flynn, Alan Flynn and James Quigley who are part of the Tipperary Senior Hurling panel that take on Clare this coming Sunday at 4pm in Semple Stadium in the fourth round of the Munster Senior Hurling Championship. Best of luck also to Darragh Egan as his Wexford side take on Kilkenny this coming Saturday at 6pm in the Leinster Championship

Many thanks to everyone for supporting the lotto. We would urge people to sign up for the lotto online at kiladangangaa,com/products

Club membership for 2022 is available to purchase on the Kiladangan GAA website at kiladangangaa.com/membership_products

Full list of membership options are available on the Kiladangan GAA social media pages. If you wish to pay in person then please contact club registrar Fergal Hayes on 086 150 6266

Enter the Kiladangan GAA Lotto online to be in with a ch...

Junior ‘B’ HurlingThe Junior ‘B’ hurlers will commence th...